Named after Jeffery R. Holland who is a 1963 graduate of Dixie college and a member of The Church of Jesus Christ of Latter-Day Saints Quorum of the Twelve Apostles, the 5-story Holland Centennial Commons Building is the intellectual, academic, and social hub of Dixie State University.

After 15 months of construction this 167,000-square foot signature building houses the new library, 26 group study areas, 6 classrooms, a central data center to serve the information technology needs of the campus, along with a digital signage/interactive touchscreen way-finding system and 2 food and beverage venues, among many other amenities.

The Centennial Commons design achieved LEED Silver Certification. The structure consisted of 40 percent glass exterior and had over 179 miles of electrical wiring used in the building. In addition to the construction of the new Centennial Commons, the $48-million project involved demolishing the Whitehead Student Services Center, extension of the utility tunnel system, site medium voltage design, addition of a chiller and cooling tower to the Central Utility Plant, expansion of the Central Plant building to accommodate new equipment and switchgear, and an addition to the electrical substation feeding the campus. 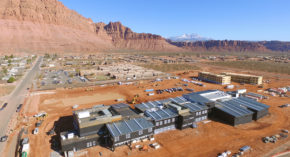 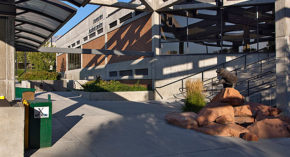 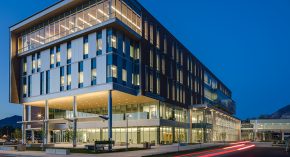 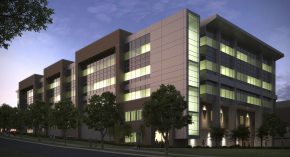